In a previous post I wrote a short intro about the high level overview of the JVM optimizations, followed by the results of some measurements, where I crafted small programs to trigger certain optimizations.

It gained some attention on some forums, and as I watched the discussions unfold on Reddit or Hacker News, I was truly amazed how many people are enthusiastic about this interesting topic.

I also realized that most of you are more precise than I am. At the time of writing I did not think that anybody will notice or care about the randomly copy-pasted assembly code on the first illustration, but many of you did. :) I hope to have some time in the future to play with JITWatch and the XX:+PrintAssembly flag to be able to correctly address my mistake.

Back to the Optimization Playground

Code motion is a technique to relocate parts of the code from hot paths, attempting to make them execute fewer times.

Expression hoisting is a form of such optimization, where an expression is pulled up in the execution graph, for example by moving the body outside of a loop without changing the semantics of the code. In the following program, the expression related to the result variable is loop invariant, as it’s guaranteed to have the same outcome for every loop iteration.

The JVM can recognize this and move the calculation out of the loop, making it look like this:

Measuring the two code samples above, in terms of speed they perform almost identically due to this optimization. Let’s break the loop invariance, by assigning the loop variable to y instead of a constant!

This is a lot slower than the first version, as all computation has to be executed in every iteration. 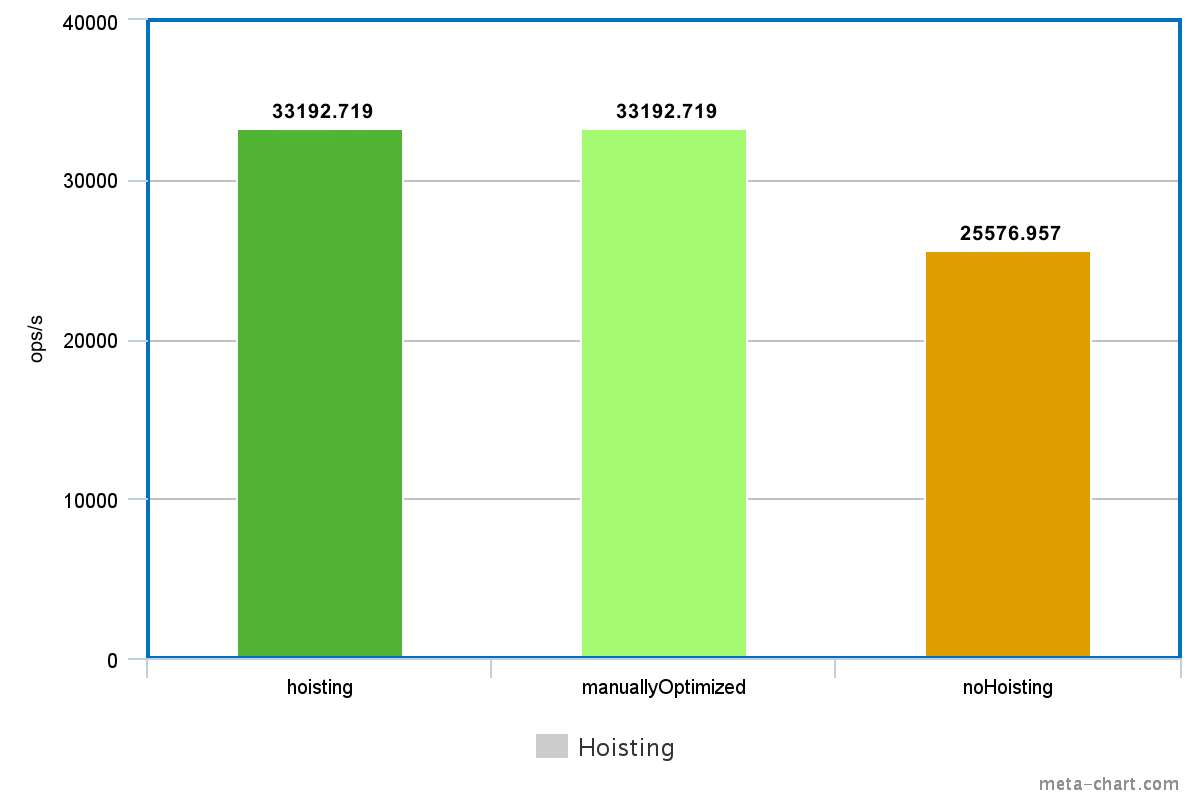 Similarly to hoisting, there is an optimization strategy that moves the affected code down the execution graph, called Expression sinking. This is useful when a precomputed value is not used in all of the subsequent branches. For example, consider the following code:

In the else branch the previously calculated result variable is not used. The JVM can recognize this pattern as well, and moves the calculation to the branch where it is needed, making the code above performance-wise similar to the code below:

Measuring the version where the result is used in both branches shows the speedup potential of this optimization. 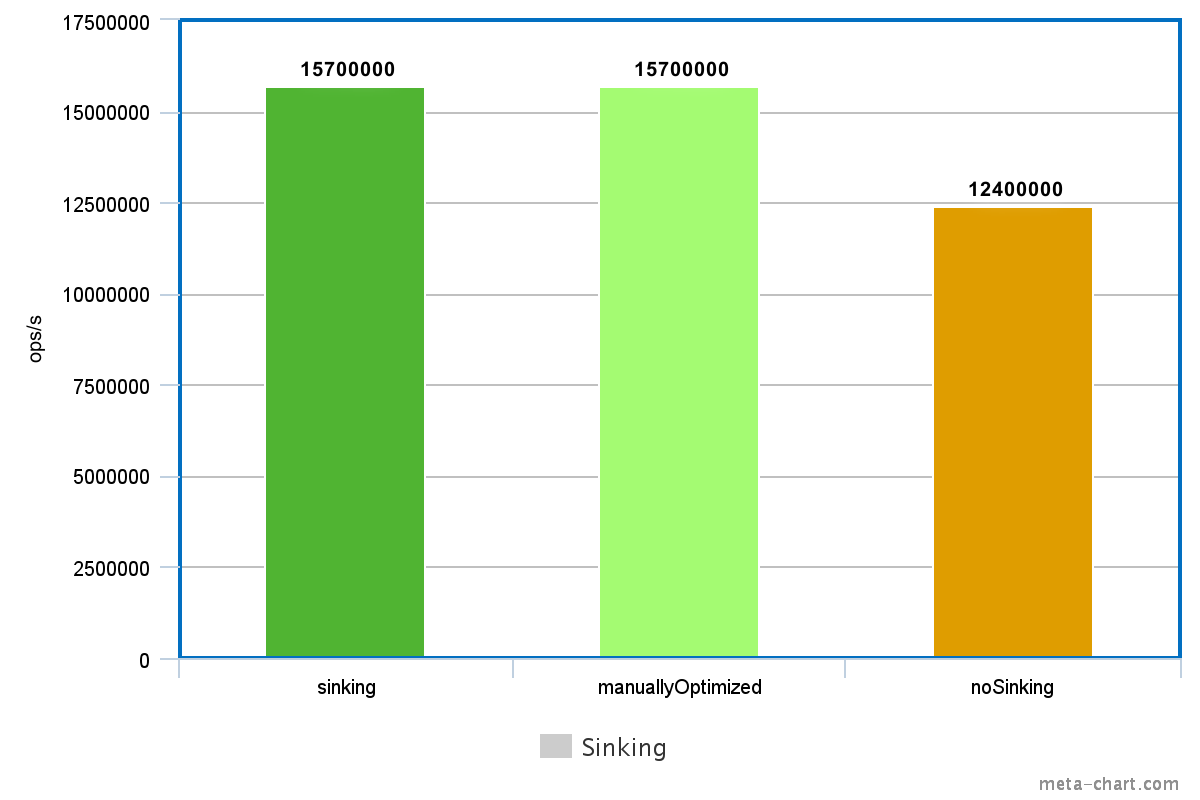 A neat trick the JVM uses is to check if there are any assignments thats result will be overwritten before the stored value is accessed.

In the code above the first assignment to the variable result has no effect on the program semantics, because nobody can see the results of that store operation. In such cases the JVM removes the useless stores, and the unnecessary computations related to them.

So technically it’s equivalent with a simple constant assignment, both semantically and performance-wise.

Measuring the two code snippets turns out that the JVM can indeed optimize this code, resulting in similar performance characteristics. Removing the constant assignment from the first snippet completely changes the outcome of the program, and of course makes the optimization impossible, thus resulting in slower code. 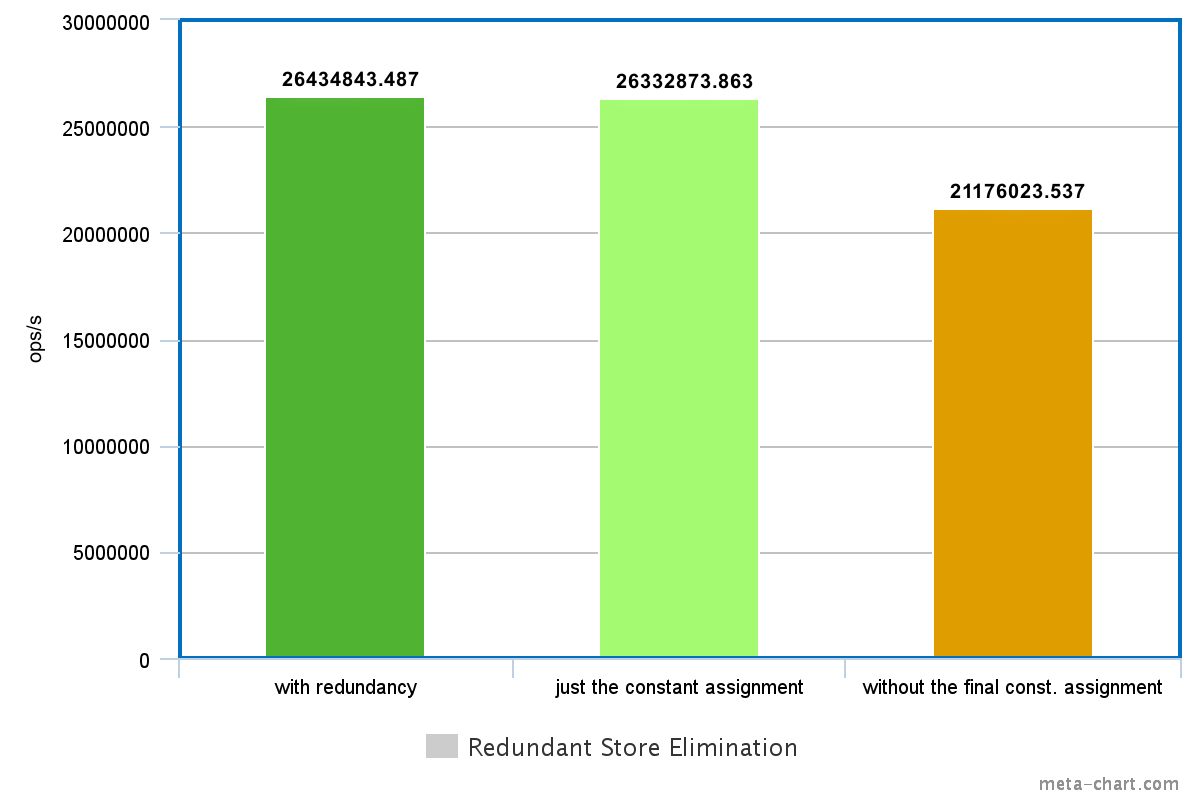 Loop unswitching can be considered a special case of code motion, where the compiler moves a conditional out of the loop, by duplicating it’s body.

For example in this case, because the myCondition is loop invariant, it’s unnecessary to calculate which branch to take in every iteration.

The compiler can transform the code to this, without changing it’s meaning:

The two code snippets above perform similarly, despite the former includes more steps if you decide to execute it step-by-step.

If there are any special cases need to be handled while looping through an array, it’s usually about it’s first element.

Loop peeling is a strategy to optimize such cases, by moving the first or the last few iterations outside the loop body, and changing the iteration range of the loop.

This optimization (and some subsequent dead code elimination) can transform it to something more performant:

The benefit is, of course, that the special case does not need to be considered in every iteration. The two code snippets perform almost identically thanks to this optimization, but if we change the condition to be something else, the performance gain evaporates. 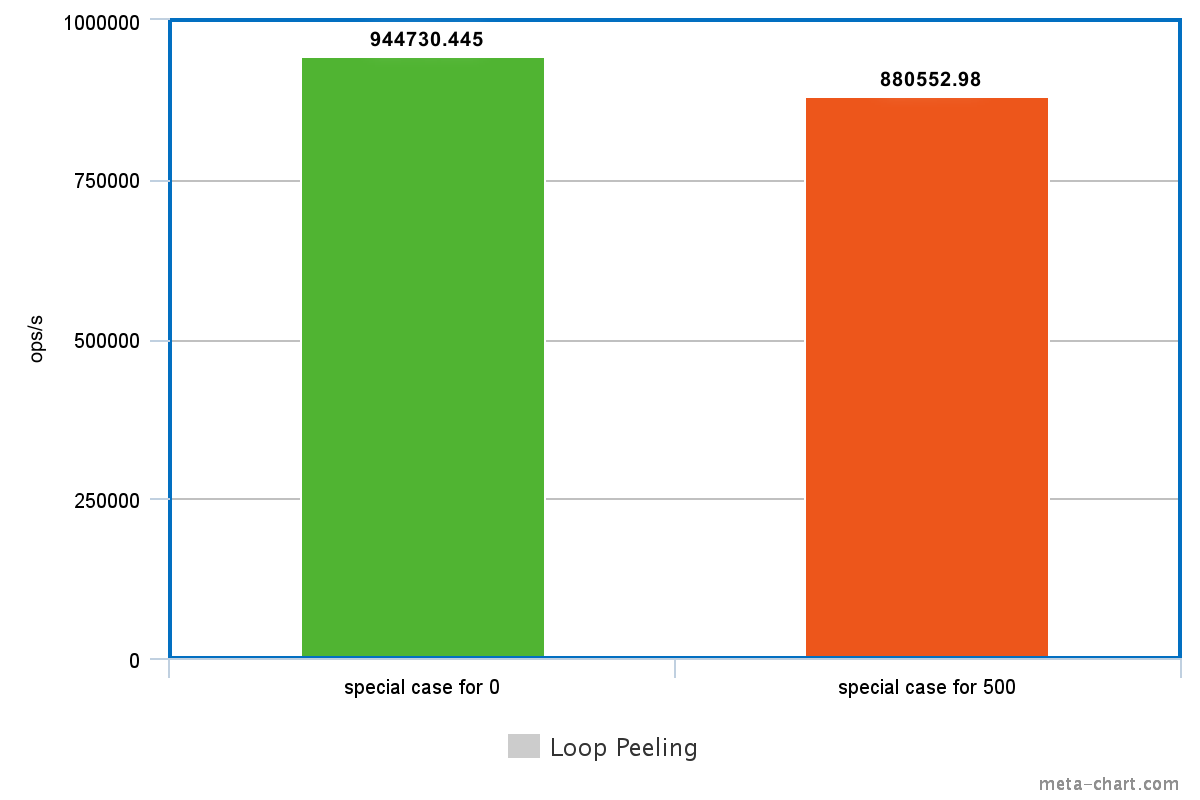 It’s really fun to dig into the details of the underlying mechanics, but it’s a bit tiresome as well. Although many presentation has long lists about what optimizations are implemented in modern JVMs, for certain ones there are surprisingly low amount of documentation available. Besides, sometimes it’s really hard to squeeze the desired behaviour out of the JVM due to it’s complexity, so if you are planning to discover them yourself, be sure to be prepared for challenges.

Taking all these advanced and sometimes magical optimizations into account, I think it’s important to note that: